The One Pair Hand in Poker 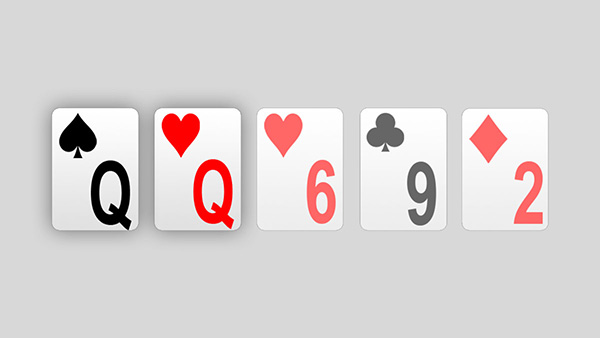 On the poker hand rankings chart, you will find One Pair listed in eighth place. This poker hand consists of two cards of the same denomination. Note that equal value cards are not necessarily One Pair, but all pairs are equal value cards. For example, a hand containing K-K, or 2-2 has One Pair.

The words One Pair immediately conveys the message that you have 1 pair in the same rank or denomination. In other words, you are holding a pair of equally-ranked cards.

If you are dealt a hand that includes a King and a Queen, and The Flop (the first 3 community cards) turns out to be K♥10♦4♣, you now have One Pair.

Curious why? Because you are holding a King and a Queen in your hand, and the first 3 community cards include a King, a 10, and a 4. Your King pairs with the King on the board to form a pair.

It is possible to form a pair by playing the board in Texas Hold’em games. If the Flop turns out to be 10♥10♣7♥, you have already formed One Pair – a pair of 10s.

When it comes to hand comparisons, remember that the highest-ranking pair always wins. The rank/denomination of the pair that you’re holding is important. If your hand includes a pair of Aces, you have the strongest possible One Pair hand. Aces beat Kings, and Kings beat Queens, and Queens beat Jacks, etcetera.

As with many poker hands, it’s the kickers that determine who wins when players have the same pair.

How to Rank One Pair Hands in Poker

Do you know which One Pair hand is the best?

Bear in mind that suits don’t matter (spades, clubs, hearts, diamonds) when ranking One Pair hands. If several hands have the same pair, then use the kickers to determine winners.

How Do One Pair Hands Measure up?

On the poker hand rankings chart, One Pair sits snugly near the bottom in eighth place. Only a high card hand is worse than One Pair, and everything else is better than this hand. Directly above One Pair is 2 pairs. The best 2 pair hand that you can form is Aces and Kings, with an Ace-high kicker.

Remember, that there is only one hand that ranks lower than One Pair – a high card hand. The highest ranking high card hand is an Ace-high hand.

Next, we’re going to look at the probabilities of forming a one pair poker hand at various stages of the game. We will consider The Flop, the Turn, and the River in both Texas Hold’em poker and Omaha poker.

Probabilities of forming One Pair in Texas Hold’em Poker

Probabilities of forming One Pair in Pot Limit Omaha (PLO)

That’s everything you need to know about One Pair poker hands in Texas Hold’em and Pot Limit Omaha. Next up, we’re going to examine the lowest-ranking poker hand – a High Card Hand.