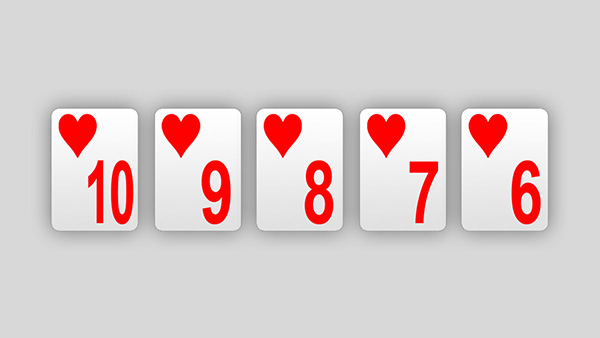 As far as poker hands go, a Straight Flush is king of the hill. This category consists of consecutive, suited cards. The best possible Straight Flush you can form is a Royal Flush. This hand includes 10, Jack, Queen, King and Ace of the same suit.

These hands rule the roost on the poker hand rankings chart. The 5 cards that make up a Straight Flush can include any sequential cards. Here are the 4 possible Royal Flush hand combinations you can form in a game of poker:

Note: Only the hand ranking matters with a Royal Flush; the suit is irrelevant. Whenever a Straight includes 10, Jack, Queen, King and Ace of the same suit, it is always known as a Royal Flush. It doesn’t matter what suit you are holding – diamonds, hearts, spades, or clubs – any Royal Flush is the highest 5-card poker hand you can form.

A typical Straight Flush could include the following cards:

How Do You Rank a Straight Flush?

A standard deck in poker contains 52 cards. Within that are 40 Straight Flush combinations that you can form. The Straight Flush is the #1 ranking hand in games of poker. Even the Royal Flush is a Straight Flush with an Ace-high set of cards.

How Does a Straight Flush Compare to Other Poker Hands?

Recall that the Straight Flush is the strongest possible hand you can form in a game of poker. That said, there are many different types of poker hands that are weaker than a Straight Flush. Four of a Kind is next in line on the poker hand ranking. It sits just below a Straight Flush and is also known as Quads.

Four of a Kind contains 4 cards of the same rank, in different suits. The best possible hand in this category is 4 x Aces.

The Probabilities of Forming a Straight Flush

There are several ways to form a Straight Flush, including the Pre-Flop, the Flop, the Turn, and the River. We will look at the probabilities for each of these scenarios, for both Texas Hold’em and Pot Limit Omaha (PLO) poker games.

That’s it! You now understand exactly how to form a Straight Flush in Texas Hold’em and Pot Limit Omaha. The next hand we are going to examine is Four of a Kind a.k.a. Quads!