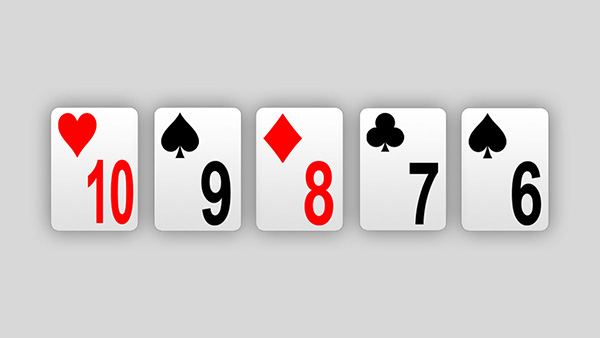 On the official list of poker hands, a Straight ranks at position #5. This poker hand is made up of 5 different cards, in sequential order.

The word ‘Straight’ makes it easy to understand what a Straight is all about. This poker hand references 5 cards in consecutive order. It’s easy to identify a Straight, since the cards are in sequence.

Let’s take a look at the highest Straight that you can form: Ace-King-Queen-Jack-Ten. This hand goes by another name – Broadway – since it features all the biggest cards in poker at the same time. The lowest possible Straight is Ace-2-3-4-5. If you hit this hand in game of poker, it is known as a Bicycle, or The Wheel.

This is what a Bicycle, or The Wheel looks like:

There are two things you instantly notice about a Straight hand:

Remember: A Straight hand is the name given to any 5 card hand featuring sequential cards. Since there are strong Straights and weak Straights, the strength of your straight hand determines how you fare against other players.

As with all other poker hand combinations such as a Straight Flush, a Full House, or 3 of a Kind, it’s the denomination of your cards that matters – not the suits.

Below are several examples of Straight hand combinations that you can form:

Straight Hands vs Other Hands

On the poker hand rankings chart, a Straight weighs in at fifth position. Directly above a straight is a Flush poker hand. The best flush you can form is an Ace-high Flush. In a standard game of Texas Hold’em poker, a Straight is still a great hand to form.

There are several hands that rank beneath a Straight, notably Three of a Kind. This hand contains 3 cards of identical rank and two other cards. The best Three of a Kind hand that you can form is 3 Aces, known in poker lingo is Trip Aces.

Next, we’re going to look at the probabilities of forming a Straight at the Pre-Flop Stage, the Flop, the Turn, and the River. We will consider Texas Hold’em poker and Pot Limit Omaha (PLO) poker games.

That’s everything you need to know about forming a Straight hand in Texas Hold’em poker and Pot Limit Omaha. Let’s move onto the next ranking hand on our listing – Three of a Kind.