Omaha poker is fashioned off the phenomenal success of Texas Hold’em poker. This game is unique in that each player is dealt 4 pocket cards for his/her exclusive use. Next up are the community cards. These start with the Flop – the first 3 community cards, the Turn – the fourth community card, and the River – the fifth and final community card. All players at the table must use 2 hole cards, and 3 community cards to form the best 5-card hand. This rule is ironclad. In Texas Hold’em, you can play any combination of cards.

Get ready to fire it up with Omaha poker at 888poker!

The history of Omaha poker is shrouded in mystery. This legendary game has nothing to do with Omaha, Nebraska, save for its name. Omaha poker is a relatively new addition to the poker scene, debuting in Las Vegas, Nevada in 1982. Compared to other popular poker variants like Badugi poker and Razz, Omaha is a young gun. Before it became Omaha poker, the game was played in different forms in cities like Chicago and Detroit.

Back in the day, players were dealt 5 hole cards, not 4. Omaha was known as Twice Three since each player received 5 hole cards in a 52-card deck. You can imagine that the number of players was limited since so many cards were dealt to each player. As Omaha evolved, it became known by different names such as Oklahoma, Nine Cards, and Fort Worth. By this stage it was played with 4 hole cards and it became universally popular throughout the US. Since the game was known by so many names, a compromise was reached to name it Omaha, as that is pretty much dead center of the United States.

Now, Omaha has several names tacked on such as Omaha Hi-Lo, Omaha Hi/Lo, or 8 or Better. By 1982, Vegas casinos were showcasing this game in grand style. It is second only to Texas Hold’em as one of the legendary poker games. The game is especially exciting, as each player is dealt many more cards to form strong hands with. This means that it’s more common to make royal flushes, 4 of a kind, and other powerful hands. In case you’re wondering, the rules of play for Omaha and Texas Hold’em are similar. Two notable differences include the way you compile winning hands, and the number of hole cards you are dealt.

Ryan LaPlante of Madison, Wisconsin, won the biggest Pot Limit Omaha tournament (PLO) in history. The buy-in was $565, and he walked away with a staggering total of $190,328 in prize money. There were some 2,483 contestants in the PLO competition, and after several days’ of grueling play at the 2016 WSOP, he came out on top.

Omaha poker rules are nearly identical to those of Texas Hold’em poker. The main differences come from the number of hole cards you are dealt – 4 instead of 2, and how you compile your winning hands. However, the are several other notable differences and we will get to them next.

In Omaha poker, each player receives 4 hole cards face down. Only that player can use his/her hole cards. Next, 5 community cards are dealt into the middle of the table for all players to use. In Omaha, you are required to use precisely 2 of your 4 hole cards and 3 of the 5 community cards to form your best hand. Omaha poker games are typically played in one of two formats: a limit format, or a pot limit format. Usually, players enjoy Omaha 8 or better, and Omaha hi.

How You Play Omaha Hi poker 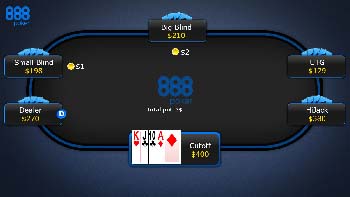 During the pre-flop session, players take a look at their hole cards. They can choose to play by calling/raising the big blind. Players can also fold, raise, or call. The betting continues around the table with all players in the hand. Next comes the Flop. These are the first 3 community cards dealt into the center of the table for players to use. Play resumes with all active players left of the button. Once the betting round has completed, the next community card will be dealt. This is known as the Turn. This face-up card joins the first 3 cards in the middle of the table. Play continues with the first active player clockwise from the button. A betting round follows. 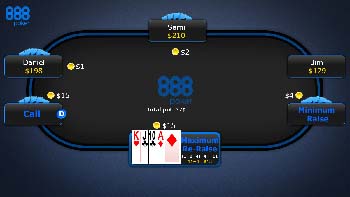 The River is the fifth and final community card dealt into the middle of the table. A final round of betting commences with the first active player clockwise of the button. If more than one player remains after this round is over, the last betting player or the last player that raises will reveal his/her cards. If there was no bet in this round, the player clockwise of the button will reveal his/her cards first. The strongest 5-card hand takes the pot in Omaha poker games. If there are identical-value hands, the pot gets split 50/50 between players with the best poker hands. 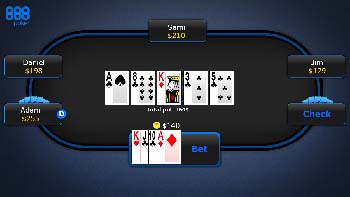 Omaha poker games are ranked according to the standard poker hand rankings. These include the following:

10 through Ace with all five cards suited

Any 5 consecutive cards of the same suit

4 cards of the same rank + another card

the highest-value card in your 5-card hand

The best low hand in Omaha poker is the following: 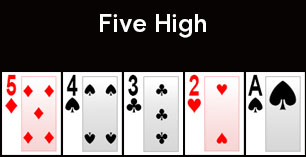 The worst low hand in Omaha poker is the following: 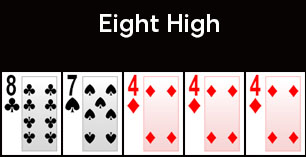 Variation of the Game

Omaha poker is available in multiple variations. These include Fixed Limit Omaha, No Limit Omaha, and Pot Limit Omaha. Let’s briefly look at each of these variants:

games require that the minimum bet is equal to the big blind. Players can increase their bets as much as they want, provided they have the chips. The minimum raise must match the bet in the same round and the maximum raise is the value of your chip stack. Unlimited raises are possible in NL Omaha.

requires a minimum bet equal to the big blind. The minimum raise must match the previous bet or raise during the round. The maximum raise is the size of the pot. There is no limit on the number of raises permitted in pot limit Omaha.

1. How Important Is Position in Omaha Poker Games?
Your playing position (early position, middle position, or late position, is especially important in Omaha. Since you can make so many different types of hands in Omaha, your position becomes even more important. Position allows you to watch what your opponents are doing and make decisions based on the information you glean from your gameplay. You can also control the size of the poker pot with a good position. The strength of your hand allows you to do this.

2. Is It Possible to Bluff in Omaha Poker Games?
Bluffing and semi-bluffing are entirely possible in Omaha poker. However, it’s advisable to learn the rules of the game, and master your betting strategy to learn how to perform against your opponents. In Omaha, you will use blocker cards to prevent your opponents from forming strong-value cards. By holding on to certain cards you can prevent other players from forming stronger hands than you.

3. What is Omaha hi-lo?
This is a popular variant of Omaha poker. The pot will be divided between the high 5 card hand, and the low 5 card hand. A strong low hand may be 8 – 4 – 3 – 6 –2. A strong high hand would be any hand that is better than the strong low hand in the same game.