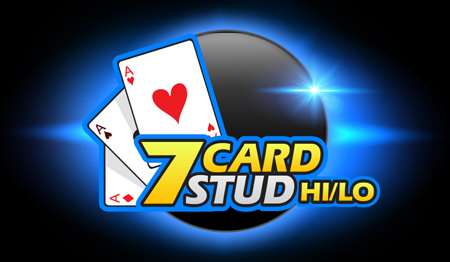 888poker proudly presents Seven Card Stud Hi-Low! This is one of the most grueling poker games on the planet, thanks to its highly technical nature. Unlike traditional Seven Card Stud, this game requires two unique hands to be formed – a low hand and a high hand. The best low hand you can form is Ace-2-3-4 & 5. The player holding the lowball hand and the traditional high hand will split the pot 50/50 at the showdown.

As with Seven Card Stud, each player is dealt 7 cards during the game, but only 5 cards are used to form winning poker hands. Since this game is played with both a low and a high hand, an 8 or Better qualifier for the low hand applies to all hi-low split games. For a low hand to win, all cards in the hand must rank 8 or lower. If it’s not possible to form a low hand, the high hand will win and claim the spoils of victory. For the poker fans out there, Aces are low or high.

The pot gets split between the high hand and the low hand. The high hand is formed in the same way as a traditional Seven Card Stud game, while the low has to comply with specific rules. It’s time to ante up for this technically challenging poker game. Once you master Seven Card Stud Hi-Low, you’ll be in the money!

The rampant popularity of Texas Hold’em was a big blow to Seven Card Stud, but the game never lost its appeal with diehard fans. This thinking-person’s poker game is unique in so many ways. For starters, there are no community cards in Seven Card Stud Hi-Low.

But where did it all begin? Nobody is entirely sure of the origins of Seven Card Stud, however it is safe to say that this game is one of the oldest forms of Stud Poker on record. Our game – Seven Card Stud Hi-Low is relatively new, much like Razz. Poker has its origins in several places – Iran and France. In Iran, this poker game is like Nas, and in France it resembles the game Poque. The game we call poker is a fusion of these two variants, with an entirely new spin. What’s particularly interesting about Seven Card Stud Hi-Low is that while the game has its origins in Europe and Persia, it is fundamentally a North American game.

The popularity of poker was boosted during the 1830s. By that stage it was enjoyed on Mississippi riverboats in the jazz capital of the world, New Orleans. Tourists were often swindled with poker games, as they were enticed into gambling by card sharks at the time. The watershed moment in poker’s development took place during the Civil War. It was then that Seven Card Stud dropped anchor and started to spread far and wide.

Some folks attribute the US military’s activity to the spread of Seven Card Stud on the US mainland. During the 1900s, poker rapidly grew into a universally popular game. It was enjoyed at American casinos, card venues, and bases around the country. By the 1980s, Texas Holdem exploded onto the scene, and Seven Card Stud dwindled in popularity. However, the game remained a hot favorite among fans, and it is readily available at online poker rooms and land-based casinos around the world.

Just in case you were wondering, there have been many sizable wins in Seven Card Stud Hi-Low over the years. A lucky player named Ernest Bohn recently scooped up $173,228 in Event #40:  $1500 Seven Card Stud Hi-Low 8 or Better. Of course, the 68-year-old player put his card playing skills to the test and bested a field of 595 players to win this staggering payday.

To get started with Seven Card Stud Hi-Low, you must commit a nominal bet known as an ante. This ante bet is a mandatory bet which all players must pay to seed the pot.

Next up is Third Street. During this stage of the game, each player will be dealt 3 cards – 2 of which are hidden from the players at the table, and 1 which is face up. The bring in is the player with the lowest visible card. He/she kicks off the action. That player can either bet at the size of the bring in, or bet at the lower betting amount. The betting action continues in a clockwise fashion around the table.

Fourth Street is next. Now, players receive an additional card face up. At this point, the player with the highest visible poker hand is first to act. He/she can either bet or check. There is a rule difference here over 7 Card Stud: all bets must be in the lower increment of the betting options for example $2 in a $2/$4 poker game. Provided you have the high hand, you will commence the betting by either checking or betting at the lower amount. A round of betting follows with all active players at the table.

Fifth Street is about ready to begin. Now, all players will receive another face up card known as Fifth Street. Judging from the exposed cards, the player with the highest-ranking poker hand will act first. During Fifth Street, the betting action ratchets up to the higher limit. In this case, bets and raises would continue at $4, not $2.

Sixth Street kicks in next. During this round, players will be dealt yet another face up card. The poker player whose exposed cards assume the highest rank will be next to act. By Seventh

Street – the River, a final card is dealt to each player in turn. This face-down card is not visible to any player other than the one to whom it was dealt. Once again, the player with the highest-ranking visible poker cards must act first. This will be followed by the final round of betting and if more than 1 player remains, a showdown takes place.

The requirement in Seven Card Stud Hi-Low is that the 8 or Better rule must be complied with. To win the low hand, a player cannot have any pairs in his/her 5 cards. And since no cards ranked at 8+ are allowed, these are tough conditions to meet.

This is how you play Seven Card Stud Hi-Low Poker

The rules of play for Seven Card Stud Hi-Low are similar in many ways to traditional Seven Card Stud. Once you’re ready to play the game at 888poker, you will want to follow this advice:

Different hand rankings need to be understood in Seven Card Stud Hi-Low games. When comparing one hand to another, it’s important to know poker hand rankings (A Royal Flush to a High Card), and what the rules state for low winning hands:

Four of a Kind

a kicker card and 4 cards of the same rank such as a 7 and a King of hearts, King of diamonds, King of spades, and King of clubs.

these are 5 non-sequential cards of the same suit. If two players have a Flush, the highest-ranking card wins out

a straight consists of 5 non-sequential cards of different suits

Three of a Kind

three unrelated cards and two cards of the same rank

For example, the best possible 5-card low hand is the following: Ace-2-3-4-5. However, another winning low hand – in the absence of better hands – could be 4-5-6-7-8. Provided the low hand meets the 8 or Better requirements, it could be a winning hand. The high hand is any hand that does not meet these requirements.

An example of how two hands compare to one another is listed below:

The First Hand will win the Low Hand part of the pot and The Second Hand is a Full House with 3 Queens and a pair of threes – the winner of the High Hand. When you’re calculating the low hand, remember that the best cards are Aces, followed by deuces, and treys. This makes the Ace the most valuable card in the game.

There are a handful of variations of Seven Card Stud Hi-Low, the most obvious of which is Seven Card Stud. Other forms of Stud Poker include Razz where the low-hand winner receives the whole poker pot!

There are a few notable differences between these two variants of the game, including the fact that the pot will be split 50/50 between the high hand and the low hand. However, it’s important to remember that the low hand must meet these requirements: no pairs and no card greater than 8.

How Is the Pot Split If an Odd Number of Chips Is up for Grabs?

If a showdown ensues and an odd number of chips are in the pot, the size of the payouts will be determined by the highest card by suit.

Are There Any Community Cards in Seven Card Stud Hi-Low?

Do Players Need to Let One Another Know If They Are Playing for the Low Hand or the High Hand?

Absolutely not! This is entirely at the discretion of each player and it is best kept private. There are certain poker games where it is necessary to declare whether you’re playing for the high hand or the low hand, but not in Seven Card Stud Hi-Low.