Texas Hold’em, otherwise known as Hold’em is the world’s favorite poker variant. This game is played fast and furious, at bricks and mortar Las Vegas casinos, and at the top-ranking online poker rooms like 888poker. This game of skill, wit, and strategy has won the hearts of poker players everywhere. Let’s get started with some quick facts about Texas Hold’em Poker:

As the legends of poker always say, “Texas Hold’em is an easy game to learn, but a tough game to master!”

This strategy-based card game is as much about playing your cards as it is about playing the player. Saddle in for a fascinating intro to the world’s ultimate poker game at 888poker!

A well-known fact about Texas Hold’em is that it got its start in Robstown, Texas. Until around 1967, the game was known as Hold’em. After that, it was introduced to Las Vegas, Nevada and its popularity exploded. One of the early proponents of Texas Hold’em was Crandell Addington. Initially, the game was only available at the Golden Nugget Casino, in downtown Las Vegas. This rundown establishment was frequented by riffraff, gangsters and gamblers. This kept many of the high rollers away.

By 1969 the Dune Casino hosted a Texas Hold’em contest, and it reeled in players from all corners. Word quickly spread about the popularity of this thinking man’s game, and by 1970 Benny Binion and Jack Binion hosted the first World Series of Poker (WSOP) at the legendary Horseshoe Casino. The game was played in a no limit format, at the Main Event of the WSOP. Over the years, the WSOP has become the gold standard of poker, and Texas Hold’em is its poster child.

Texas Hold’em Poker has created scores of legendary players over the years, including Texas Dolly (Doyle Brunson), Phil Helmuth, Chris Moneymaker, Phil Ivey, Stu Ungar, Daniel Negreanu, Eric Seidel and Antonio Esfandiari. According to the stats gurus, Daniel Negreanu is the all-time money winner with $32 million in lifetime payouts, and Eric Seidel close behind at $30 million. In third place is Daniel Colman with $27,967,060, followed by Antonio Esfandiari at $27,967,060, and Phil Ivey at $23,856,035. The biggest WSOP poker winner on record is Antonio Esfandiari with $21,516,913 in poker pots.

Texas Hold’em poker is a straightforward game to play. Once you know the rules, you’ll breeze through each round. Each player is dealt 2 hole cards. These are dealt face down. The dealer will deal The Flop (the first 3 community cards), The Turn (the fourth community card), and The River (the fifth and final community card) in the center of the table. These cards are for all players to use. You must form the strongest 5-card hand using your hole cards and/or the community cards.

*Hands are evaluated according to the hand rankings listed below.

Poker games are played according to their betting limits, with the following 4 options available to you:

888poker offers players the widest possible variety of poker betting limits for added convenience. We offer low buy-ins for casual players and there’s plenty of juice for high rollers too!

This is How You Play Texas Hold’em

The best way to get started with Texas Hold’em is the poker room. 888poker provides you with all the tools and resources you need to learn the rules, perfect your playing strategy, and bring home the bacon. Practice makes perfect. The finest poker players have fine-tuned their craft because they understand how to play the game. Once you’ve downloaded our software, you are step closer to playing Texas Hold’em poker.

Let’s take a quick look at the rules so that you can familiarize yourself with the most important aspects of your gameplay:

At times, you may need to make an additional bet – a bring in bet – known as an ante. This will be posted by all players currently in the game. Once the blinds have been posted, each player will receive 2 hole cards face down. The betting proceeds in a clockwise fashion around the table starting with the player clockwise from the Big Blind. That player is under the gun!

You have multiple betting options available to you in Texas Hold’em poker. These include: Raise, Call, Bet, Fold or Check. If no other players at the table have placed a bet yet, you may be able to check – make no bets but play your cards. If a bet has been placed, preceding players can raise, fold or call accordingly. When you raise, you match the previous bet, and increase it as well. 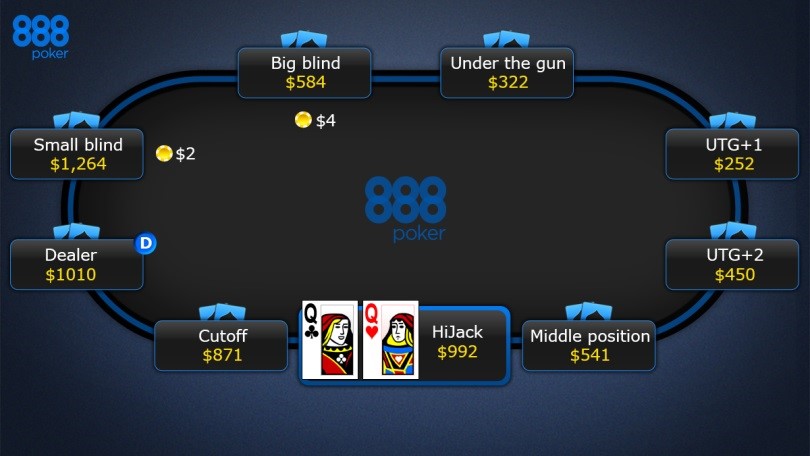 Once you’ve seen your hole cards, you’ll be able to play your hand by calling/raising the big blind (BB). The action begins left of the big blind. The player can call, fold or raise accordingly. The betting action continues in a clockwise fashion around the poker table. 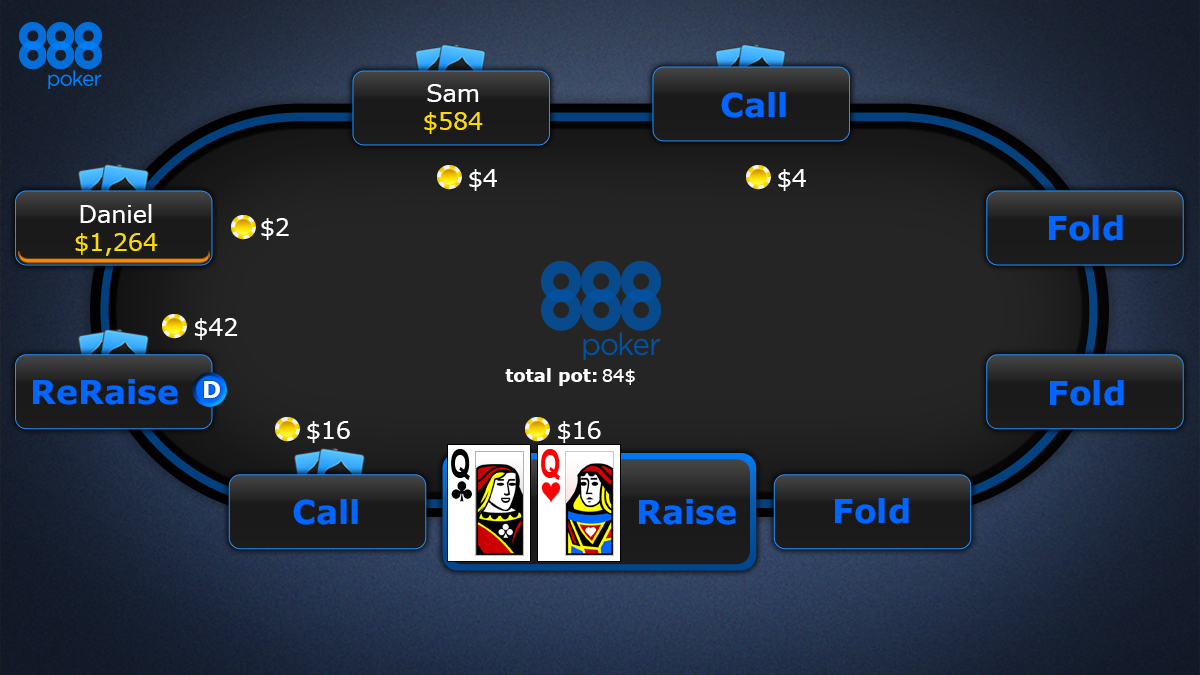 Once the first 3 community cards have been dealt face up, all players at the table can use these to start forming the best 5-card poker hand. The player immediately to the left of the button commences the betting action. Play continues in a similar fashion to the pre-flop session, but if nobody has placed a bet yet, you can check – this moves the action to the next player who is still in the hand. 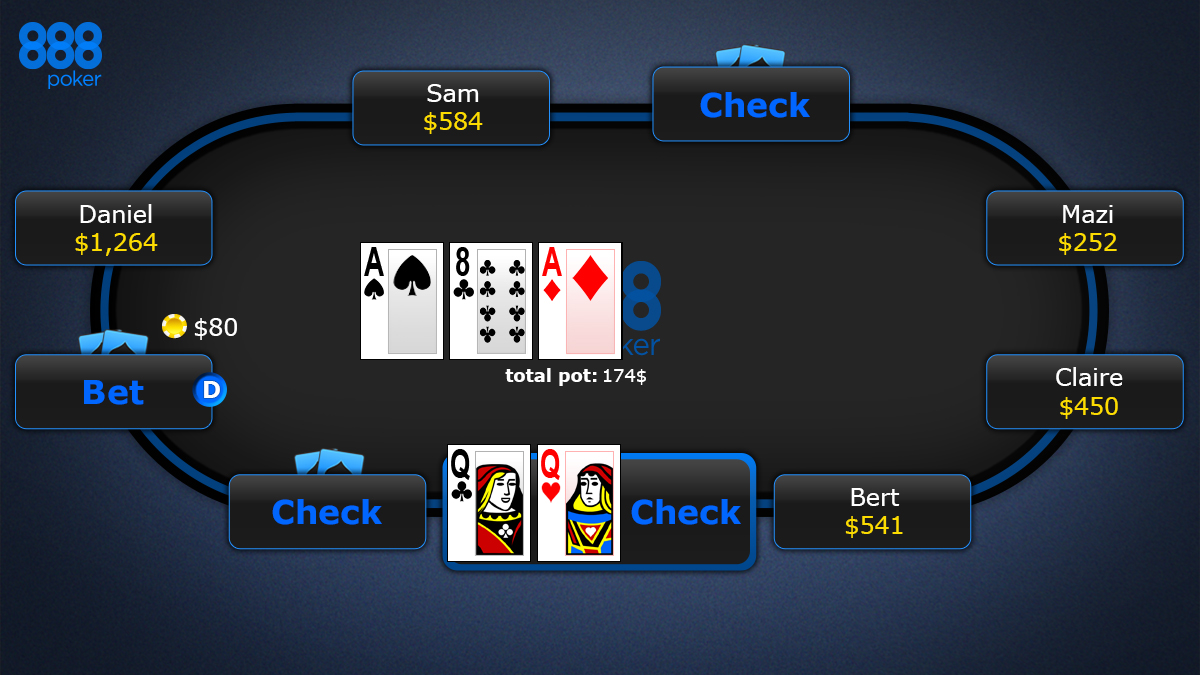 The turn is the fourth community card dealt into the center of the table – the board – for players to use. Another name for it is Fourth Street. An additional round of betting follows, starting with the first active player located clockwise from the button. 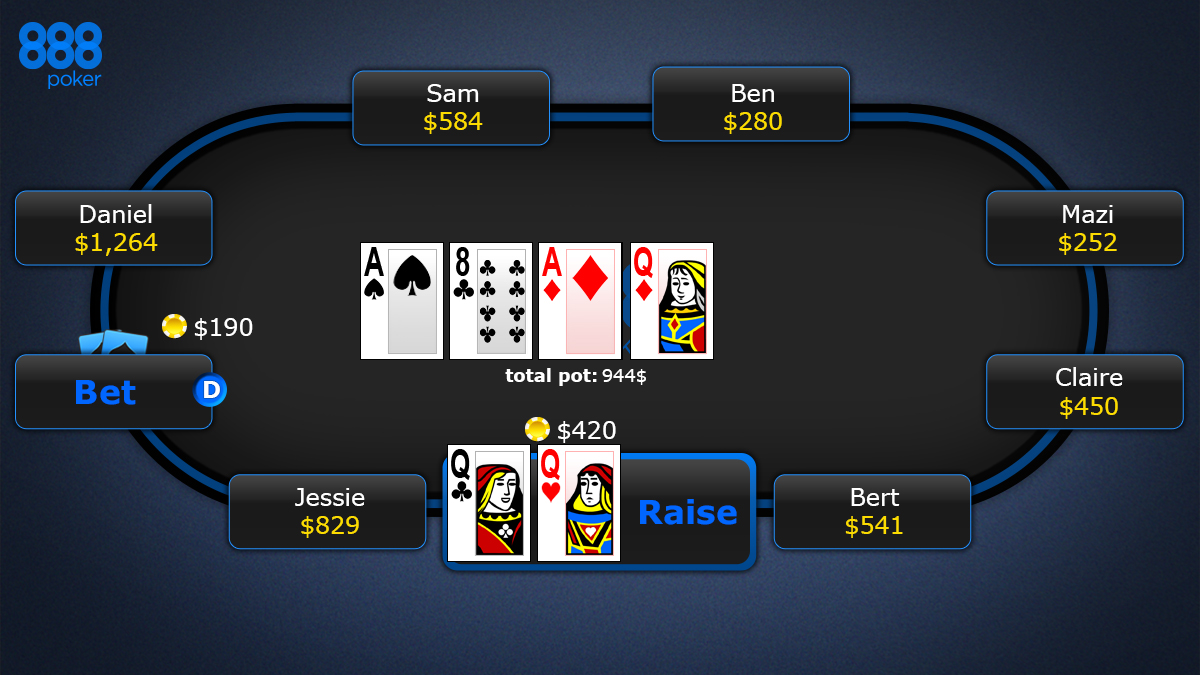 Once Fourth Street is over, Fifth Street begins. The River Card is the fifth and final community card dealt face up into the middle of the table. The first active player clockwise from the button commences betting. The same rules apply. 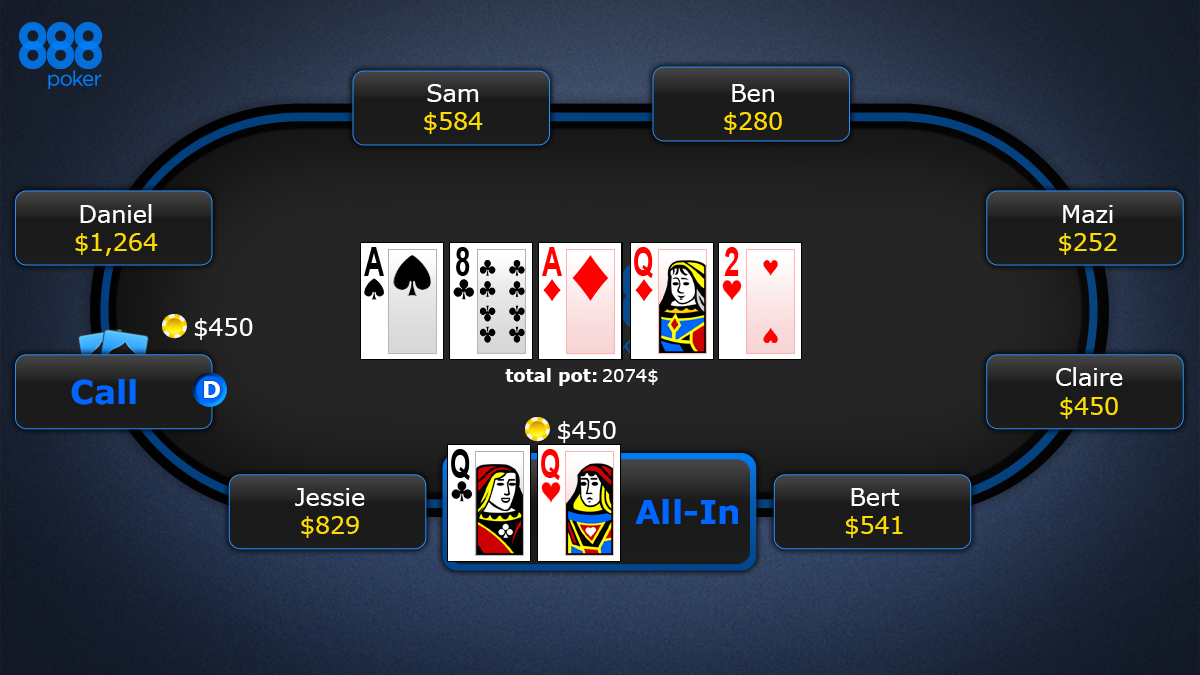 At this stage of the game, if more than 1 player remains after the final betting round, the last player to bet/raise will reveal their cards. The player with the strongest 5-card hand will win the game, and enjoy the spoils of victory. If there are identical-value hands, the pot will be split 50-50 between those players. In Texas Hold’em poker games, there is no distinction between suits when it comes to sharing the prize money. 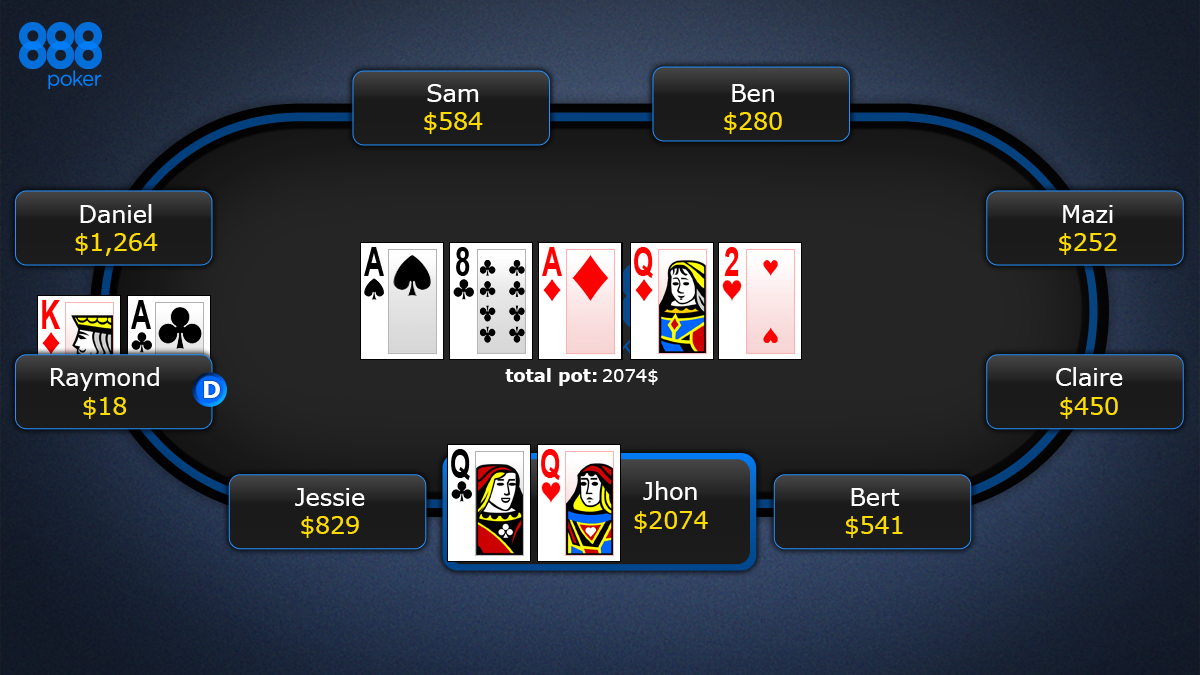 Texas Hold’em follows the standard hand rankings of poker games. These include the following:

Four of a Kind

a kicker card and 4 cards of the same rank such as a 7 and a King of hearts, King of diamonds, King of spades, and King of clubs.

these are 5 non-sequential cards of the same suit. If two players have a Flush, the highest-ranking card wins out

a straight consists of 5 non-sequential cards of different suits

Three of a Kind

three unrelated cards and two cards of the same rank

Variation of the Game

1. How do you bluff in Texas Hold’em?
Bluffing is a skill that is acquired over time. The more you practice bluffing, and the less frequently you use it, the greater your chances of successfully confusing other players. A player who bluffs constantly is unlikely to confuse other players. The bluff works best when used infrequently

2. Is there a difference between cash games and MTTs with Texas Hold’em Poker?
Absolutely! Your style of play will vary between cash games and tournaments. With cash games, you need to play tight while you’re in early position (EP) and loosen up as you move towards the middle and late stages of play. It is important not to waste money in the early sessions of play – the pre-flop sessions. With tournaments, it’s important to keep your pot sizes small and as the blinds ramp up, your chip stack will start to shrink. That’s when tournament players have to tighten up their game and you will be required to steal blinds more frequently

3. What is poker bankroll management?
Your bankroll is your lifeblood in poker games. Manage it well, and you will manage your gameplay well. A poker player without effective bankroll management techniques is a sure loser. For cash play, you should have at least x20 your buy ins in bankroll cash. Sometimes, you may want to up that to x 50 your buy-in. In MTTs, your bankroll should ideally work on a sliding scale. As the size of your poker bankroll increases, you can also increase the amount you allocate to buy ins.

4. Is risk-management important in poker games?
Risk management is essential to success in poker. You certainly don’t want to risk more than needed where variance can upset your equilibrium and cause you to lose all your cash. Always risk enough to allow for the possibility of a decent return. You will always need a substantial poker bankroll to protect you against variance. Your poker bankroll should always determine the level that you’re playing at; that way you will not be subject to the crazy fluctuations that invariably take place.